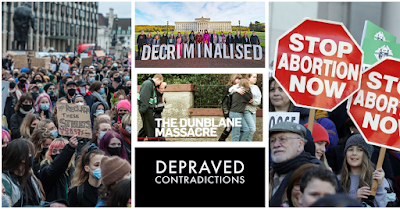 There is no section of our society more vulnerable, yet more precious than our children.   Christ Himself prized highly the little ones, telling the disciples that they must be allowed to come to Him and condemning those who harmed the children with the strongest of words.

Last week television presenter, Lorraine Kelly, was a part of an excellent ITV production which looked back at the Dunblane massacre, twenty-five years ago, when almost an entire class of primary one children and their teacher were gunned down by a lone psychopath.  In this tearful encounter with the parents of these children the event was called the slaughter of the innocent.

Society quite rightly wrings its hands in despair at such barbarity while at the same time promoting and defending the depravity which will cause untold harm to our children and young people.  Herein lies the wicked contradictions of this generation.

Last week a report commissioned by the Department of Communities looking at a gender equalities strategy for Northern Ireland was published.  This department which is led by Sinn Fein Minister Deirdre Hargey received the report from the advisory panel made up of “experts” in the field.

The report made some recommendations which I find most disturbing.  It concluded that sex education in Northern Ireland was insufficient because it was not inclusive of the experiences of all young people.  In a manner of speaking the report is recommending that LGBT experiences are included as part of the school curriculum, as well as abortion.  The panel recommended that the delivery of these proposals should not be dependent on the ethos of the school and to achieve this the teaching should be conducted by an outside body and not by the local teachers.  Therefore the principals and local governors would be disregarded and presumably the wishes of parents as well.

In a statement the DUP pointed out that the delivery of education in this way would need to be approved by the Department of Education and by the Northern Ireland Executive.  This certainly appears to be over reach by the Department of Communities and we are grateful that there are those in Government who will oppose these moves but it is troubling that there  are some who want to push such an extreme agenda of perversion and legalised murder onto the most vulnerable in our society.

There seems to be no end to the liberal juggernaut and its depraved ambition to control and manipulate every part of our lives and to mould the thinking of our children.

Of those who would would dare to promote such a programme aimed at distorting young minds the words of Christ are as true as they were for the Dunblane gunman:

\”But whoso shall offend one of these little ones which believe in me, it were better for him that a millstone were hanged about his neck, and that he were drowned in the depth of the sea.\”  (Matthew 18:6)

As a church and as parents we must be vigilant and pray much that the Lord would shelter our little ones.

The most cruel contradiction of all, however, is the murderous act of abortion itself. Already more than 1,000 little babies have been slaughtered in Northern Ireland since the introduction of abortion less than one year ago.  People weep because of the deaths of sixteen primary one children in Dunblane twenty five years ago, plus their teacher who died trying to protect her “wee” class, but are completely without emotion when the law murders children who have a right to life, in the very place God designed for their nurture and safety.  Abortion in the western world, has strange depraved echoes of the Nazi death camps and gas chambers and it fills me with horror.  If there is one sin that will bring God’s wrath upon this United Kingdom, it is the slaughter of the innocent, approved by Parliament, consented to by our Queen and funded by our NHS.

I am grateful that there is a push back against abortion in the Northern Ireland Assembly led by Paul Givan  MLA.  His Private Members Bill is designed to give disabled children in the womb the same rights as disabled people outside the womb.  If passed abortion will be illegal up to term on the basis of disability.  Our lives are greatly enriched by the disabled children who are blessed with the opportunity to live and contribute to the well being of society.  Nazism saw the disabled as a hindrance and sent them to their deaths with millions of others.  While we want to see abortion abolished all together, if Mr Givan can see his Bill through the Northern Ireland Assembly to Royal Assent, it will provide a platform for arguing against all abortion in totality.  If disabled children have a legal right to protection why not all children?

In the wake of the Sarah Everard murder in London, there has been a huge outpouring of grief, together with a highlighting  of the threats that many women face when walking alone. We rightly defend the rights of our ladies to feel safe and we share in the grief and thoughts that have been expressed.

But we also must point out the cruel contradiction – we wish to defend the innocent against attack and murder while the same time millions of innocent babies have been robbed of life and little revulsion is expressed.

While men are responsible for violence against women, which we rightly abhor, it is women who make the choice to have their unborn babies “terminated”.  Men, however, are responsible too , having fathered the children, and in many cases refusing to take responsibility for them, therefore persuading mothers that they have little option.  Depravity crosses the gender barrier and encompasses people of all generations and ethnic backgrounds reminding us that “all have sinned”.  Yet we must be sympathetic at the plight that some of these women find themselves in and accept that the moral and legal structures of society make it possible for them to make this tragic choice.  This is absolutely a society wide problem which we collectively must take ownership of.  We must stand up and say – Abortion is not the solution.

These cruel contradictions are symptomatic of a society sickened by selfish and heartless brutality. They illustrate most graphically the brokenness of a people who have ignored God and risks being abandoned by Him.

As a church we must must face the challenge biblically and prayerfully for the sake of the next generation.

\”If my people, which are called by my name, shall humble themselves, and pray, and seek my face, and turn from their wicked ways; then will I hear from heaven, and will forgive their sin, and will heal their land” ( 2nd Chronicles 7:14).